Back during the second week of September, we in Penn State Christian Grads hosted Simon Camilleri of The Backyard Bard here in State College. It was the last stop of Simon’s USA tour for the show Elijah, a dramatic storytelling of 1 Kings 17 – 2 Kings 2. Prior to coming to State College, he’d been in Atlanta for the Network of Biblical Storytellers Conference to start his tour, then he spent a week in Tucson, a week near Chicago, a few days in NYC, a few days in upstate New York near Utica, and then a few days in Pittsburgh. Simon’s friend Kable agreed to drive him over to Altoona to meet up with us for supper on Tuesday the 9th, and fortunately my car got fixed just in time for me to drive down there with Tracy. Ash & Heather agreed to host him at their house for the week. Originally I’d been thinking of maybe hosting him some nights at our apartment, but being able to stay in a guest room at the Hollemans’ just seemed like a much better plan.

We had a whole bunch of activities planned with Simon for the week that he was here. On Wednesday the 10th a bunch of us from PSCG took him out to lunch at Fraser Street Deli, and then in the evening we met to go on a quick hike in Rothrock State Forest, along the Mid-State Trail to a great view on Little Flat Ridge, overlooking Bear Meadows. After the hike we all helped Ash & Heather make some of their famed “chocolate beef” — delicious! 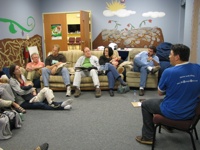 On the evening of Thursday the 11th Simon put on a Biblical storytelling workshop at the E-Free church. I had absolutely no idea how many people to expect, but about a dozen people came. Simon’s done workshops for groups as small as two or three and as big as seventy, so a relatively small group actually made the whole thing a bit more intimate, and allowed Simon to spend a bit more time working with each of us, which was good. He started out the workshop by asking us each to partner up and tell the other person our experience of the September 11th terrorist attacks, and then telling the other person’s story to the rest of the group.

Then we each were randomly given different snippets from the Gospel of Mark, short passages a few verses long. The snippet I picked out just so happened to be the “weather story” — where Jesus calms the wind and the waves. Very apropos, if I do say so myself! Simon had us practice reading our passage aloud several times, to read it as if we were reading the story as if we were there and it had just happened. When you approach it that way, it really does change how you read Scripture. 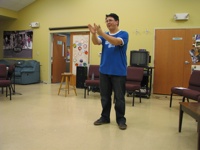 Instead of the normally droll manner in which Scripture is often read aloud, it should be read with emotion and passion, particularly the narrative, because that’s how it was meant to be read. 51% of the Bible is narrative, a historical account of events, but the Biblical authors definitely knew how to write the narrative in a manner which would be interesting to hear. Anyway, we each then had a chance to practice “internalizing” the story (rather than memorizing), and then we each performed a storytelling of our own snippet of Mark in front of the group. It was a really fun and inspirational evening at the storytelling workshop. Maybe sometime in the future I’ll try to practice a storytelling of a chapter or so. 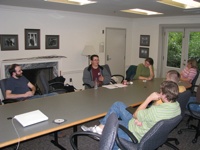 On Friday the 12th Simon spoke at PSCG Friday Forum, with a talk entitled “Letting It In: The Importance of Biblical Narrative.” At Friday Forum he echoed many of the things he’d said at the storytelling workshop the night before, including emphasizing that the Bible was originally meant to be read aloud. That’s because at the time it was written down, at most only about 5% of people could read, so the Biblical texts were always read out loud to people. In the cases of the New Testament epistles, the messengers would not just read the letter upon delivery, he would commit it to memory and recite it when he arrived at his destination, before then giving the written letter to the recipients. One of his main points is that the public reading of the Bible should not be neglected, especially in this current age where most people simply read their Bibles silently and by themselves, and that it should be taken more seriously in terms of preparation. All good points, for sure. After a few of us took Simon out to eat at DP Dough, I took it easy at home for the evening while Simon went to the UCM Barn Dance with Tracy and some other people. I just wasn’t in the mood for yee-haw or dancing, but then again, that’s the case more often than not! 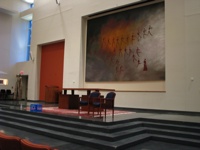 On Saturday the 13th we all gathered at the Hollemans to watch some football and teach Simon some of the rules. It wasn’t exactly a competitive game to showcase to Simon though, as Penn State battered Syracuse 55-13, after leading 38-6 at the half. But hey, at least the game was effectively over when Simon & I had to leave for Pasquerilla Spiritual Center on campus to go set up for the first performance of Elijah! About 30 people came to the first performance, which is far fewer than I had hoped for, especially for a venue as cavernous as the Worship Hall at Pasquerilla. It didn’t matter to Simon though, as we just had everyone crowd up to the front, and then Simon ditched the lapel mic and spoke with “natural” amplification. 🙂 The performance went very well, and everyone who came absolutely loved it. At some point after the show, when I was thinking about the small number of people who came, I came to the realization that God is in control of who came, and that no matter how much work we put into advertising it, ultimately we can’t do anything to get people to come. Only God can. And the people who God wanted to come to the show came. So that really changed my attitude about everything. After the show we all went out to Texas Roadhouse for the “cast party.” 🙂 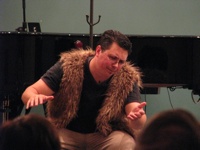 Simon came with me to church on Sunday the 14th, and then in the evening was the second Elijah performance, this time at the E-Free church. That show had a much warmer feel to it, not only because it was a smaller venue (capacity ~250 instead of ~450), carpeted (Pasquerilla has polished stone/tile floors), and with a much better sound system, but also because more people came, about 80 or so. 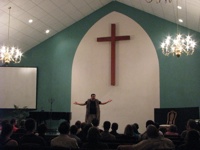 It was also Simon’s final performance of Elijah, not just on his USA tour, but probably ever, so he was a bit sentimental about it too. Once again, everyone in the crowd absolutely loved the show. Simon had different accents for every character in the show: Elijah was Australian, Ahab was upper-class English, Jezebel was French (haha), the Syrian soldiers in the battle at Ramoth Gilead were American, 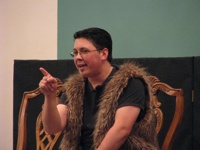 and the angel of the Lord was Scottish; all the accents were quite entertaining! Among the comments we had from people after the show were that they were eager to read the rest of 2 Kings to find out what happens to Elisha, and that prior to the show, they didn’t realize the connection between Elijah and John the Baptist (at the end of the show, Simon storytold a good chunk of Mark 1). 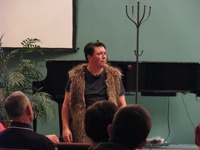 That’s exactly the type of reaction we were hoping to get, to open people’s eyes to the truths of the Bible, and to get people excited about reading the Bible again. We hope to make a DVD of the show from E-Free, since we recorded the video on a digital camcorder and the audio on CD. Eventually I suppose I’ll get around to figuring out how to merge those two things. Might be a little while though, considering how much stuff I have on my plate. 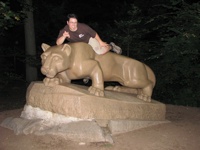 On Monday evening several of us took Simon to dinner at Outback Steakhouse here in State College. Believe it or not, Simon requested that his last meal with us be at Outback, so he could see for himself how Americans portrayed Aussie culture and food. He also planned on asking the waitress for genuine Australian cuisine that he knew would have no chance of being on the menu, like a Vegemite sandwich or kangaroo steak — and he followed through! It was great! When the waitress asked him what Vegemite was, he simply pointed to the poster that was on the wall right by our table, and then explained, “It’s awful stuff, it’s a spread that we put all over everything, but we feed it to our kids intravenously so that they grow used to it.”

Hilarious! Simon, Tim & I were all able to finagle our way into getting an egg on our burgers too, like would be common in Australia. Instead of a fried egg though, the cook interpreted “egg” as “diced hard-boiled egg.” Oh well, we tried. 🙂 After dinner Tracy & I drove Simon down to a hotel in Harrisburg, so that he could catch his 6am flight to Honolulu the next morning. It was sad to say goodbye to Simon, but hey, I’ll have another person to visit when I go down there next! And hopefully either Simon and/or Rob will be able to come back up here on another tour in 1-3 years. The whole week was a huge success from our perspective, and we’re eager to have them back.

Being the primary organizer of Simon’s visit and all the activities/performances we planned, I was kept very busy all week. And to be honest, it was very wearing on me, especially since I was still exhausted from the week before with Aaron’s funeral, and was feeling pretty overwhelmed in the middle of the week, when I realized all the picky details that had yet to be taken care of or organized. It was probably a good thing that I had to keep myself busy with all those logistical details and everything, but I was also glad to have a few evenings mostly to myself after Simon left, to relax finally and actually start processing everything that had gone on. As Simon told me, the timing of Aaron’s death and all the Elijah stuff here in State College was not a surprise to God, and that he hoped that God was able to use him to help me get through my grief, even in some small way. And I really think He did, because of really being in and thinking about God’s Word all week. Especially at the workshop on Thursday night, I felt a sense of calm come over me as we were spending so much time in the Gospel of Mark, and my feelings of being overwhelmed and entirely exhausted really started to go away.